skip to main | skip to sidebar

Atmospheric transformation: an ode to cold weather and fuzzy socks

UT has this program called PALS, where they hook you up with an international student and you get to know each other, experience other cultures, and they get to practice their English. I've done it for several semesters, and it's still every bit as awesome. I finally got my two PALS last week, and I'm so excited to meet the two girls from China. I look forward to spending quality time with them and learning even more about Chinese culture (while hopefully exchanging a recipe or two in the process!).
In other news: Austin is weird. Last week it was relatively chilly and rainy until Thursday, when it was in the 80s, hot and humid. Friday it was raining again and in the 50s, and I drank some hot apple cider in celebration. Today it is no longer raining, but it's still in the glorious 50s. It makes me so happy, because it makes me think it might actually be fall!  But of course, it will be in the 80s later on this week. It reminds me of this one day last December: The day started out in the 80s, dropped to the 40s and started hailing that evening, then dropped even more and snowed later that night. Only in Austin...
It's amazing how a chilly, clear day can automatically fill me with joy the entire day. I have a paper due tomorrow? Ok. I have to wait on the bus an extra 20 minutes? No big deal. The electrical outlet in my apartment is going crazy? Sure, but it feels great outside! My friends know that if the weather is beautiful, they will hear me saying it over and over again! My roommate and I get so excited when we can turn off the AC for good and just leave our windows open. Sure, our noses are cold and we walk around the apartment in sweatshirts and extra socks, but it's so wonderful to be able to feel how real the weather is, both inside the apartment and outside.
There's just something about weather that fascinates me though, and gives me a deeper glimpse into God's greatness. Think of how big of a concept weather is. In order for the weather to change, a million things have to happen on a really big scale, and it's all interconnected through the atmosphere around the world. Crazy thought, huh? But God is so much bigger than all that.
"The earth shook; the heavens also dropped rain at the presence of God; Sinai itself was moved at the presence of God, the God of Israel." ~Psalm 68:8
The most violent storm is a puff of wind to the God who created the universe. Please read chapters 38-42 in the book of Job in the Bible for God's own words concerning His GREATNESS over His creation. It will blow your mind. 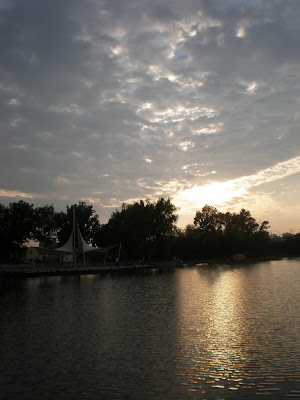 I love learning about different cultures and languages. I also love meeting people for coffee.